Audiobookworm Promotions is organizing an audiobook blog tour for The Girl from Whitfield Hall, a Mystery novel from Author Pete Harrison.

Review copies will be distributed by Apr. 8th. Reviews posted during the tour need to be of at least 3.5 stars. 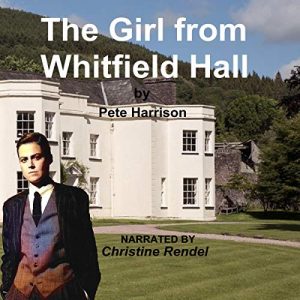 Emily stood in front of a full length mirror in her well-appointed Camberwell apartment. She turned sideways on and looked over her shoulder before doing the same the other side.

“Anna, do you think I could pass for a man?"

Emily was nearly six feet tall; she wasn't fat but was definitely solidly built. Her small breasts and wide hips showed her to definitely be a woman.

“Whatever do you mean miss?”

“Well if I bound my chest, padded my stomach a little and wore a man’s suit, with all my hair cut off, do you think I would look like a man?”

“Why ever would you want to do that miss?”

Anna was never surprised by anything her mistress said, she was always unpredictable and had some very funny notions.

“I’m going to dress as a man and pass myself off as a detective in the London police force. I’m never going to get anywhere as a woman”.

About the Author: Pete Harrison

One time Telecoms engineer with a second career as a Racecourse Bookmaker, now retired and pursuing his love of the Theatre by becoming involved as a theatre technician he now heads up the sound department at the Loft Theatre, a highly regarded semi professional theatre in Leamington Spa. Varied interests include horse racing and all sports, WW1, music and theatre. The girl from Whitfield Hall, his first novel has ignited a passion for storytelling.

About the Narrator: Christine Rendel

Represented as a voice actor by CESD Talent Agency NYC

Over 13 years experience in radio and broadcast production.

As an actor, performed in her native Britain, internationally and in New York Off and Off-Off-Broadway, on film and TV, and has numerous TV, radio, multi-media and industrial credits.

Founding member of the Anglo-American theater company Mind The Gap Theatre, and a member of SAG-AFTRA, APA and AEA.

Apr. 14th: Interview questions due to me.