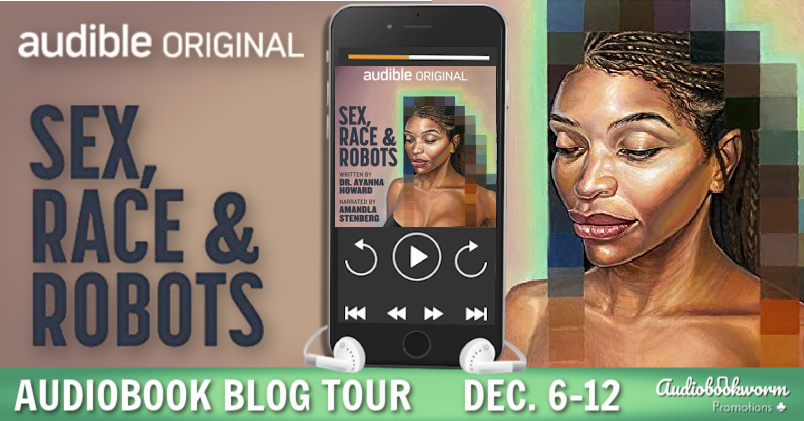 Audiobookworm Promotions is organizing an audiobook series blog tour for Sex, Race, & Robots: How to Be Human in the Age of AI, a Non-Fiction novel from Author Dr. Ayanna Howard.

The tour will run from Dec. 6th to 12th and will have 20 maximum stops.

Signups for the tour end on Nov. 30th.

Reviewers will receive complementary digital copies of the audiobooks via Audible US.

Review copies will be distributed by Nov. 4th. Reviews must be of at least 3.5 stars. 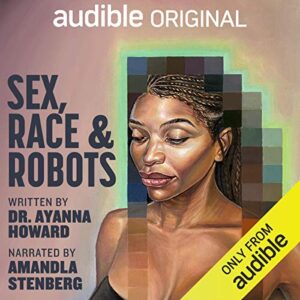 In the movies, robots can be terrifying. In reality, thinking machines are disrupting the world in ways that are even more disturbing than in Hollywood fantasies—but they also have the potential to change our lives for the better.

In this stirring, visionary work, acclaimed roboticist Dr. Ayanna Howard explores how the tech world’s racial and sexual biases are infecting the next generation of Artificial Intelligence, with profoundly negative effects for humans of all genders and races.

Drawing on cutting-edge research, and her own experience as one of the few Black women in the field of robotics, Dr. Howard shares how she navigated bias in her own coming-of-age as a roboticist. She also reveals how the world of computer programmers, which largely lacks women and Black people, is producing thinking machines that too often think like their flawed creators.

The danger of bias in our AI-powered machines has never been greater. Governments are using supercomputers to track COVID-19 patients. AI is being employed to monitor Black Lives Matter protests. Voice recognition systems have been rolled out that can’t hear female voices. Dr. Howard delivers a stirring warning about the risks of AI and robots—but also offers an uplifting message about empowerment and where we need to go next.

About the Author: Dr. Ayanna Howard

Dr. Ayanna Howard is an innovator, entrepreneur, leader, and international expert in robotics and AI. Currently, Dr. Howard is Professor and Chair of the School of Interactive Computing at the Georgia Institute of Technology. She also serves on the Board of Directors for the Partnership on AI and Autodesk.

Prior to Georgia Tech, Dr. Howard was at NASA's Jet Propulsion Laboratory where she held the title of Senior Robotics Researcher and Deputy Manager in the Office of the Chief Scientist. Her research encompasses advancements in artificial intelligence (AI), assistive technologies, and robotics, and has resulted in over 250 peer-reviewed publications. At NASA, she worked on designing advanced technologies for future Mars rover missions. Now, she works on projects ranging from healthcare robots to developing methods to mitigate bias and trust in AI. In 2013, she founded Zyrobotics, an education technology startup, which designs AI-powered STEM tools and learning games for early childhood education.

To date, Dr. Howard’s unique accomplishments have been highlighted through a number of awards and articles, including highlights in Vanity Fair, USA Today, Upscale, Black Enterprise, and TIME Magazine, as well as being recognized as one of the 23 most powerful women engineers in the world by Business Insider and one of the Top 50 U.S. Women in Tech by Forbes. She regularly advises on issues concerning robotics, AI, and workforce development, including functioning as an AI advisor on the YouTube Future of AI documentary series produced by Robert Downey Jr. and Evaluator for the Google $25M AI for Social Good Challenge.

Dr. Howard is a frequent speaker and media expert source for venues such as CNN and NPR. She regularly gives invited talks at venues such as the Smithsonian Design Museum, TED talks, Science Museum of London, Detroit Science Museum, and the National Security Agency. She has also been featured in various interviews and podcasts hosted by places like PBS, Discovery Channel, BBC, Fox News, Huffington Post, and VIBE

Nov. 30th: Deadline for signing up. Media packets are distributed via email.